Due to the global shortage of components, the expected delivery time for Network Interface Cards is 24 – 30 weeks at the moment.
Please contact us if you would like to discuss your requirements. T: 020 7517 4900

In addition to all the existing innovative features of past versions, ConnectX-6 offers a number of enhancements to further improve performance and scalability.

For Cloud and Web 2.0 Environments

Cloud and Web 2.0 customers developing their platforms on Software Defined Network (SDN) environments are leveraging the Virtual Switching capabilities of the Operating Systems on their servers to enable maximum flexibility in the management and routing protocols of their networks.

Open vSwitch (OVS) is an example of a virtual switch that allows Virtual Machines to communicate among themselves and with the outside world. Software-based virtual switches, traditionally residing in the hypervisor, are CPU intensive, affecting system performance and preventing full utilization of available CPU for compute functions. To address this, ConnectX-6 offers ASAP2 – Mellanox Accelerated Switch and Packet Processing®technology to offload the vSwitch/vRouter by handling the data plane in the NIC hardware while maintaining the control plane unmodified. As a result, significantly higher vSwitch/vRouter performance is achieved without the associated CPU load.

Over the past decade, Mellanox has consistently driven HPC performance to new record heights. With the introduction of the ConnectX-6 adapter card, Mellanox continues to pave the way with new features and unprecedented performance for the HPC market. ConnectX-6 VPI delivers the highest throughput and message rate in the industry. As the first adapter to deliver 200Gb/s HDR InfiniBand, 100Gb/s HDR100 InfiniBand and 200Gb/s Ethernet speeds, ConnectX-6 VPI is the perfect product to lead HPC data centers toward Exascale levels of performance and scalability. ConnectX-6 supports the evolving co-design paradigm, which transforms the network into a distributed processor. With its In-Network Computing and In-Network Memory capabilities, ConnectX-6 offloads computation even further to the network, saving CPU cycles and increasing network efficiency.

Data analytics has become an essential function within many enterprise data centers, clouds and hyperscale platforms. Machine learning relies on especially high throughput and low latency to train deep neural networks and to improve recognition and classification accuracy. As the first adapter card to deliver 200GbE throughput, ConnectX-6 is the perfect solution to provide machine learning applications with the levels of performance and scalability that they require. ConnectX-6 utilizes the RDMA technology to deliver low-latency and high performance. ConnectX-6 enhances RDMA network capabilities even further by delivering end-to-end packet level flow control. 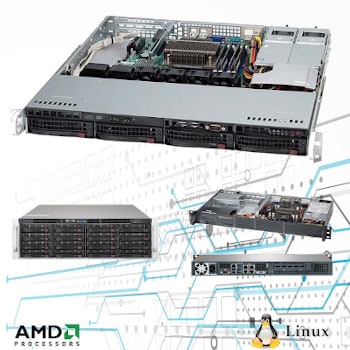 If you don’t have the required hardware for your projects, we can consult, build, configure and install any server to your specifications. Of course, you can still supply your own servers to seamlessly integrate into Watchfront’s secure datacentres.